THERE ARE 140 MILLION ORPHANS IN THE WORLD: This Is the Story of One of Them 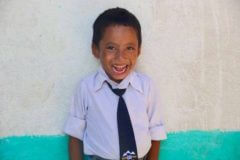 Written by Mitch Ditkoff, Co-founder and President of IDEA CHAMPIONS

Originally published by the HuffPost Blog, link here. Our immense thanks and gratitude to Mitch Ditkoff and HuffPost Blog.

There are many things a person can pay attention to in the world. Some people watch the news. Some watch their waistline. Still, others watch for telltale signs in the sky, waiting for the rapture. Bruce Keenan, Founder of Himalayan Children’s Charities watches something very different – the welfare of orphaned children in Nepal. With untold thousands of Nepalese children homeless these days, that’s a lot of watching — especially when you consider the fact that Nepal’s devastating 2015 earthquake left another 320,000 children without a place to lay their head.

One of those children was Monika, an extraordinarily resourceful six-year-old, who first came to HCC’s attention in September 2016 when she was found wandering between local villages and an IDP camp (internally displaced person’s camp). Her only caregiver at the time was her grandfather — homeless, himself, after the 2015 earthquake — a man who would leave for days at a time while he wandered the countryside looking for work. Monika’s preference would have been to live with her mother, but her mother was in prison. Her father? Long gone, having abandoned Monika at birth. And her grandmother — the one who cared for her until the age of two? Recently deceased, gone from a heart attack that took her life the same month Monika’s mother went to jail.

And so, at six, when most girls her age were playing with dolls or listening to bedtime stories, Monika found herself roaming from tent to tent, village to village, begging for food and dreaming of a place to sleep when the sun went down. Her education? Bare bones. As informal as it gets. Enrolled in nothing official, she would show up, unannounced, at different schools – a smile, somehow on her face – and be given three things: a bowl of government-issued porridge, the lesson of the day, and a chance to play with children her own age.

It wasn’t long before Monika learned to sing her ABC’s and had memorized just enough English phrases to make a lasting impression on the staff of HCC upon first meeting them. Her favorites? “I am Monika”, “I am fine”, “and “Madam, may I come in?”

YES, Monika, you can come in. After what you’ve been through, you can most definitely come in. And with the help of an organization like the Himalayan Children’s Charities for much longer than a night.

Having gotten the full backstory of Monika’s situation by a concerned neighbor in the IDP camp, the HCC team began doing everything they could to lend a hand. They bought her anti-worm medication. They bought her food. They bought her clothes, a toothbrush, hair clips, soap, and even some costume jewelry. And though, by their own admission, their efforts were only a drop in the ocean, at least it was a start.

Over the next few months, the HCC team continued visiting Monika regularly, meeting with her few remaining relatives and, trying (unsuccessfully) to get her enrolled in a school for incarcerated parents. Sailing wasn’t always smooth, but at least the winds of change were being felt.

Encouraged, HCC made the trek again to Rasuwa in February 2017 and worked their magic to get Monika enrolled in a top local school and a place to stay at a nearby hostel. Now, off the streets, Monika was getting the kind of consistent support she so desperately needed – physical, emotional, social, and psychological. Then, unexpectedly, her mother was released from prison, many years before anyone expected. If this was a Hollywood movie, both mother and daughter would embrace. They would look into each other’s eyes. They would find a way to rise from the ashes. But this was not Hollywood. This was post-earthquake Nepal and her mother left town almost immediately. Her parting words? “I am not interested in caring for her and have no plans of coming back.”

Monika’s story, no matter how gut-wrenching it may seem, is not at all unique. There are millions of abandoned children in the world and many of them have similar stories, some much worse. An estimated two million orphans are subject to sexual abuse on a daily basis. Every week, 250,000 children die from diseases and malnutrition. And who knows how many millions cry themselves to sleep each night? This is not fake news, my friends. This is real news, no matter how unreal it may sound to you right now.

The good news? NGOs like the Himalayan Children’s Charities exist all over the world – committed groups of loving, dedicated, big-hearted people reaching out with everything they have to the disenfranchised and dispossessed – not just “orphans” as a cause, but orphans as unique individuals because these children, like millions of others around the world, are the future of the planet you and I call home.

Yes, Monika is an orphan. And yes, the deck was stacked against her from an early age. But so it was for Eleanor Roosevelt, too… and Malcolm X… and Marilyn Monroe… and Steve Jobs… and Babe Ruth… and Edgar Allan Poe… and Henriette Pouget, my own 90-year old mother-in-law – all of whom were orphaned early in life and struggled mightily to find their way. But find the way they did.

And so, in service to hope, resiliency, and humanity, the Himalayan Children’s Charities has committed to providing Monika with ongoing services through young adulthood and a loving, extended family built on love. If possible, they will continue providing readers of the Huffington Post with yearly updates, their hope-filled homage to this young Nepalese girl’s challenges, victories, and dreams – a chance for the rest of us to see what’s possible when the heart opens and the human spirit soars.

Mitch Ditkoff is the President of Idea Champions, an innovation consulting and training company headquartered in Woodstock, NY. His most recent book, Storytelling at Work, is all about the power of personal storytelling to increase the depth, meaning, and transmission of tacit knowledge on planet Earth.